If history and archaeology interest you, you’re in the right place! The Maltese islands are absolutely rich in history. The earliest records of human settlement date back to 5200BC. Since then, Malta has experienced centuries of cultural change and progress that has shaped the beautiful country that it is today. Malta is home to multiple amazing historical sites and museums for you to visit, whether you’re a local or a visiting tourist. 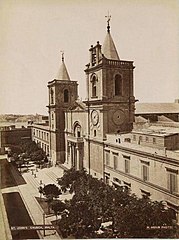 St John’s Co-Cathedral is a Roman Catholic co-cathedral located in Valletta. It is dedicated to St John the Baptist. It was built by the Order of St John between 1572 and 1577, having been commissioned by Grand Master Jean de la Cassiere as the conventual Church of the Order. It was designed by the Maltese architect Girolamo Cassar, who designed several of the most important buildings of Valletta at the time. In the 17th century, its interior was redecorated in the Baroque style by Mattia Preti and other artists. The interior of the church is considered to be one of the finest examples of Baroque architecture in Europe. The church was initially named in the Italian common language of the time, as “Chiesa Conventuale di San Giovanni Battista”. Once the cathedral was completed in 1577, it became the new conventual church of the Order, replacing St Lawrence’s Church in Birgu, which was the Order’s headquarters prior to building Valletta. 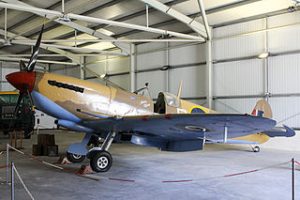 The Malta Aviation Museum is an aircraft museum situated on the site of the former Royal Air Force airfield in Ta’ Qali. The museum, which consists of three hangars, covers the history of aviation on the island. Most of the exhibits are from the Second World War and post-war periods. The museum is involved in the preservation and restoration of aircrafts, some of which are in airworthy condition. The three hangars that make up the museum include the Main Exhibition Hangar, the Air Battle of Malta Memorial Hangar (which features airframes from the Second World War period), and the Romney Exhibition Hangar.

The Malta Maritime Museum is a museum in Birgu. It is housed in the former Royal Naval Bakery, which was built in the 1840s as the main bakery for the Mediterranean Fleet. The museum has a collection of over 20,000 artefacts, and is the largest museum on the island. The museum’s aim is to illustrate Malta’s maritime history, from prehistory to the present. This is shown within a Mediterranean and global context. Since its establishment, the museum’s collections have increased through donations from Maltese and foreign individuals, foreign maritime museums, foreign navies, and several companies and corporations. These artifacts include boats, anchors, cannons, weapons, documents, paintings, uniforms, and a 1950s steam engine. The most prominent display would most definitely be the large model of a ship from the Order of St John’s navy.

The National Museum of Archaeology 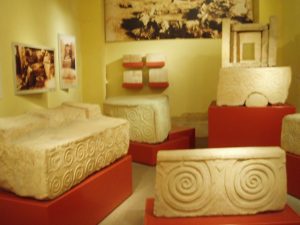 The National Museum of Archaeology is a museum of prehistoric artifacts, located in Valletta. It is managed by Heritage Malta. The building was previously the Auberge de Provence of the Order of St John. Artifacts are placed in climate-controlled displays in order to meet current conservation standards. The building itself was built in a baroque style designed by Girolamo Cassar, the same architect responsible for St John’s Co-Cathedral. The building’s facade is imprinted with Mannerist characteristics, usually associated with Cassar. The grand salon on the first floor of the museum exhibits prehistoric artifacts of the Maltese islands, from the Ghar Dalam phase of 5200BC, which is the earliest period of recorded settlement on the island, up to the Tarxien phase of 2500BC.